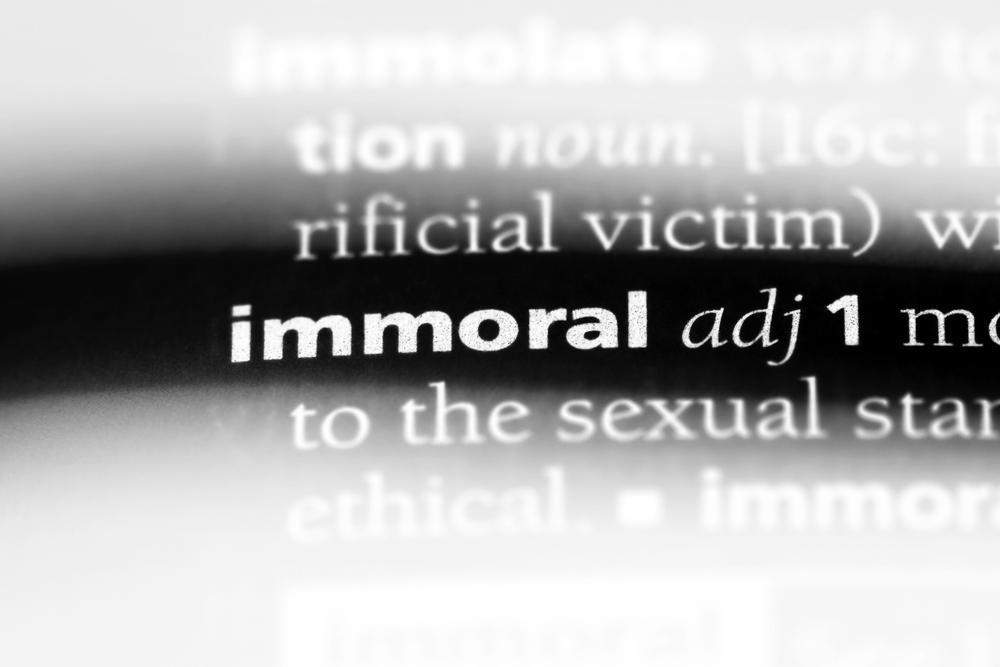 (PatriotHQ) The most common people in our society are thieves, drug addicts, sexual perverts, arrogant community organizers, and corrupt people. They are now seen as normal, while the good citizen s seen as sick and abnormal!

In other words, immorality is causing spiritual and ethical inflammation in America. American immorality has become corrosive to society thereby inflaming underlying problems in family, personal and social life.

How this immortality started in our country is exactly what we said would happen years ago. The Left doesn’t want to change people’s minds about being gay or transgender, using drugs, being homeless, coming into the country illegally, or even voting illegally. It’s APPROVAL they want. Yes, even if someone stole an election.

Gay rights were not about giving gay people rights. They never gave up anything. They were already married. It was a clear shot at Christianity.

Many people think nothing of crime because it’s happening so often. Thieves in masks walk into a store, rob it while people look on in shock, and leave as if they just went shopping. What the level of crime, especially drug and sex trafficking, open borders policy has caused is shocking. The way the Democrats try to cut down on crime is by making everything either legal or a minor offense.

Perversions of sexuality are now very common. Public libraries, where the traditional librarian, the epitome of sobriety, works, have become a hub for information and support for alternative sexual lifestyles, with the homosexual flag hanging on the wall or waving from the flag post. No stories about faith are allowed, but next week there will be a drag queen. States like California, Colorado, Illinois, and New Jersey now have to teach LGBT history and talk about how they have helped.

Gay rights were not about giving gay people rights. They never gave up anything. They were already married. It was a very clear attack on Christians.

Boston Children’s Hospital, which used to be one of the best places to take care of kids, now advertises transgender procedures can change your son or daughter from a he or she to an IT.

To a Democrat, the only way to save democracy is for them to cheat at elections. For our own good, THEY decide who should be our leaders. They say the political Right is trying to destroy our democracy, our rights, our standard of living, and the “soul” of our country. You have to give the Left a lot of credit for guts. They break everything they can get their dirty hands on and blame the other side right away.

Cases about election crimes have been turned down by all courts.

Many millions of people don’t like the way elections have been handled over the past few years. Early voting, ballot boxes, no voter ID, bloated voter rolls, ballot harvesting, hackable voting machines, and attempts to lower the voting age to 16 have made elections as interesting as a Seinfeld episode.

All courts have turned down cases having to do with election crimes. It’s not like there wasn’t any proof. They just threw out the cases, not the proof. They wouldn’t even look at it. The price of justice was too high, as if justice itself had a cost. Chief Justice Roberts was even heard yelling at his colleagues because they were going to look at a few cases after the elections in 2020. He told them riots and fights would happen if they joined in. There is no profile of courage.

Many politicians no longer care about what is best for their citizens. Instead, they focus on what will keep them in power as soon as they get elected. Before he left office, Obama was said to have set up an unbreakable Deep State. It was getting worse because of Trump, so he had to go. No politician in modern times has ever been harassed, lied about, and lied about by so many people.

I don’t think Arizona will have a fair election for a long time. The last race for governor was a mess. It was so stupid; it didn’t even make much sense. Hobbs (I won’t say Katie Hobbs because it sounds too good), who was Secretary of State and in charge of making sure elections were fair, refused to step aside because she had a conflict of interest. Even though the county supervisors had doubts about the election, her office threatened them with felony charges and jail time if they didn’t certify the election in favor of Hobbs.

Even though Arizona had years to get ready for this midterm, there were big problems with voting machines at more than half of the polling places, and 90% of them were in GOP areas. People got tired of waiting in long lines and went home. It took weeks to count less than 2 million votes, while Florida did it in just a few hours. Since 1948, Arizona had always been a Red State. The Democrats wanted it, and no matter how they got it, they got it. They are now making sure they have a strong power base.

So much immorality, perversion, and breaking the law has become normalized by the Left.

So much perversion, immorality, and breaking the law has become normalized by the Left it is very likely  they are making everyday life so bad  almost any other option would be better. And they have other ideas too. It’s called the New World Order, Project 2030, and The Great Reset. They will “look after you.” All you must do is give up your rights, your things, your freedom, your children, and your God.

What’s going on here? The Democrats do this because they know they can get away with it. The effort the Left is putting in to reach their goals is way more than what the Right is giving them. The Democrats will do “whatever it takes” to win. The Right has no idea what’s coming their way.

The cure is simple, America needs to have a foundation in a moral approach to living and nothing better teaches this than the Bible.