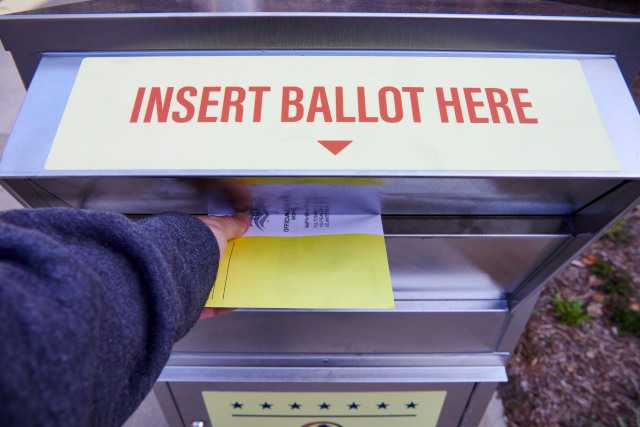 Catherine Engelbrecht, the founder of True the Vote, along with board member Gregg Philips were finally released from jail in Houston, Texas on Monday, after a panel residing on the U.S. Court of Appeals overruled an order issued by a federal judge. Which, of course, was using jail time as a means of trying to force the pair to give information on an informant that allegedly provided them with evidence of voter fraud. Because if you don’t subscribe to the propaganda narrative pushed by the leftists, they will find ways to crack the whip on you until you bend the knee.

WND reports that the two were jailed a week ago after U.S. District Judge Kenneth Hoyt held both of them in contempt of court in a current defamation lawsuit against the pair for refusing to give up the name of a confidential source. Apparently, Hoyt doesn’t understand the definition of the term “confidential.”

“Those who thought that imprisoning Gregg and I would weaken our resolve have gravely miscalculated. It is stronger than ever,” Engelbrecht went on to say in a statement.

Moore continued, “The 5th Circuit’s order came in a civil lawsuit filed in September by Eugene Yu, the CEO of the Michigan-based, election software company Konnech. Yu charges True the Vote made baseless and racist accusations that forced him and his family to flee their home in fear for their lives and damaged his company’s business. He contends True the Vote falsely claimed Konnech was storing U.S. election information on servers in China through its software app PollChief, posing a national security risk. However, only weeks after the defamation suit was filed, Yu was arrested and charged by Los Angeles County prosecutors for allegedly storing election worker data on servers in China. The prosecutors called it ‘probably the largest data breach in United States history.’”

The defamation suit has kept marching on and the jailing of both Engelbrecht and Phillips happened after a Thursday hearing in which Judge Hoyt, appointed to the bench by former President Ronald Reagan, found them in contempt for refusing to give the name and contact information for a source who was present during a meeting in a hotel back in January 2021. True the Vote claims that during this meeting, the group was given evidence that Konnech was improperly storing personal data of U.S. poll workers on Chinese servers.

“In her statement Monday, Engelbrecht noted ‘the right to free and fair elections without interference is more important than our own discomforts and even this detention, now reversed by a higher court,’” Moore said.

“We are profoundly grateful for that,” she remarked. “We will continue to protect and defend those who do the vital work of election integrity, and we will make sure that their findings become a matter of public record.”

Engelbrecht then stated in a post on Truth Social after her release from jail that she and Phillips are “incredibly grateful for everyone’s prayers and support.”

“I’ll say this, what is publicly known is just the tip of the iceberg. Please stay connected. We’re all in this together,” she added. “Hold the line. Keep the faith. God is good.” 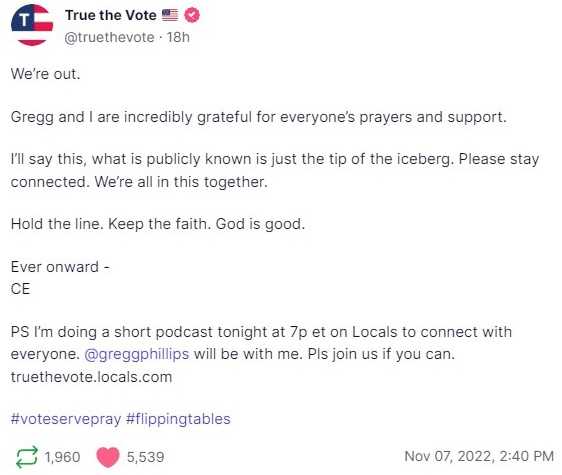 During a hearing held on Oct. 6, Brock Akers, the attorney representing True the Vote, told Judge Hoyt that his clients “don’t want to release the name of the individual.” The lawyer did provide a few details about the source, stating that he was an analyst who was in “danger from forces of the Chinese Communist Party.”

“True the Vote – whose investigation of ballot trafficking was featured in the film “2000 Mules” – has characterized the lawsuit as an effort to try to silence the organization. Konnech obtained an ex-parte temporary restraining order in secret, True the Vote said, so the election integrity group would have no opportunity to contest it,” Moore stated in the WND article.

“In the criminal case against Yu by Los Angeles County prosecutors, the complaint cites as evidence a message from a Konnech project manager through a Chinese-owned messaging app that said ‘any employee for Chinese contractors working on PollChief software had ‘super administration’ privileges for all PollChief clients,’” Moore added.

Former CIA officer Sam Faddis provides some perspective for the statement in a post he published on Substack: “An individual with super administration access to a system can do effectively anything inside that system. He or she can delete data, steal data, alter data, change programming, etc.”

“In August, True the Vote disclosed its Konnech investigation at an invitation-only event in the Phoenix area. Engelbrecht and Phillips said their team had notified the FBI, and the agents with whom they communicated were alarmed by the potential national security implications,” Moore reported.

Later on, however, after working with both Engelbrecht and Phillips on what they called a “counter-intelligence operation,” the FBI supposedly turned on them, with the bureau’s Washington branch taking over the probe. That was the incident that made the folks at True the Vote decide it was the right time to release information to the public.