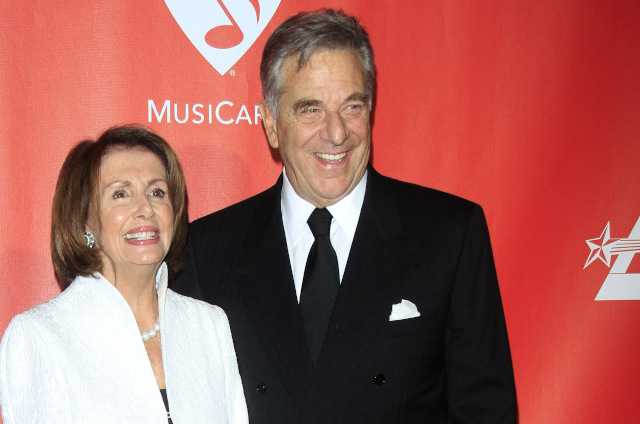 When it comes right down to it, there isn’t a whole lot we know about the bizarre attack on House Speaker Nancy Pelosi’s husband last Friday, aside from the fact the suspect that was arrested for the crime was “mentally unstable” with a brain that was addled by “long-term drug use.” I mean, that might as well be a descriptor of Joe Biden. Well, maybe not the drug use part, but you get the drift. This really isn’t saying much.

The man, according to WND, is a “pro-nudist activist, convinced that ‘he was Jesus for a year,’ who lived in a bus on a semi-commune and has embraced conspiracy theories from the left and right,” said columnist David Harsanyi writing for The Federalist.

Is it any wonder, given the lack of information we possess about the suspect and the incident, there are so many theories, rumors, and questions floating around the Internet? And yet, despite all of these questions, the Speaker refuses to release the security camera footage of the assault.

“Likely, Harsanyi finds, because with the truth of the matter uncertain, leftists can insist that ‘every conservative personally ‘condemn’ the actions of the mentally ill man,’” WND stated.

But that would have “nothing to do with lowering the rhetorical temperature or averting violence,” but instead has “everything to do with trying to compel Republicans to take responsibility…” he noted in his article on the subject.

“That appeared openly in the Washington Post, where three bylines appeared on a piece headlined, “Attack on Nancy Pelosi’s husband follows years of GOP demonizing her,’” Bob Unruh remarked in his WND piece.

The commentary then goes on to explain that because the GOP has repeatedly leveled criticism at Nancy Pelosi and her radical progressive agenda and ideology, this act of violence occurred. It’s a big, big stretch because no one has been advocating for someone to take matters into their own hands and attempt to harm someone in the government. Conservatives have been advocating against her policies, not wishing she’d be assaulted or killed. Pretty big difference.

“By ‘demonizing,’ the Post means that Republicans run lots of political ads targeting perhaps the most powerful, partisan leader in the nation. Pelosi is demonized in the same manner Mitch McConnell or Donald Trump or Ron DeSantis are demonized. Remember ads depicted Paul Ryan pushing grandmas off cliffs? Is it that kind of demonizing?” Harsanyi asked.

Even if this guy were not considered to be “unstable,” the Republican Party must still stand boldly against the harmful policies that Pelosi pushes in the House, which are doing significant damage to the United States.

“Yet, this weekend, John Dickerson was wringing his hands on CBS News over the alleged structural and rhetorical pro-violence position of the right. You see the trick, right? Conservatives have a duty to self-flagellate over the Jan 6 rioters, to answer for Alex Jones and white supremacists of Charlottesville, and to condemn the nudists of Berkley, because they’re the ones who have allegedly coddled those extremists in the first place. It doesn’t matter that the vast majority of conservatives have never supported or instigated any violence, whatsoever,” he continued.

What really ought to bake the noodle is how these same individuals who are attempting to blame conservatives for the attack on Pelosi tend to completely ignore the violence that comes pouring out of the left on a regular basis, a hypocrisy that Harsanyi pointed out.

“There is no CBS News panel convening to agonize over the left’s support for BLM after riots decimated neighborhoods across the nation in 2020 — the costliest in American history,” he wrote.

The Republic Brief is the publication that noted “there is no security footage being released to the general public, and the left is trying to pretend that it is no big deal and that everyone should just move along.”

They confirmed there was indeed security present at the home, however, the report then said, “In other major crimes that have occurred against a notable person security of the incident was released but in the Pelosi case, we are not only not receiving security footage but instead the mass media is changing the narrative every chance they get. At this point, there are way more questions than answers…”

Some of the questions we need answered include why in the world Pelosi was holding a hammer and why the attack happened after the police arrived. This is all very, very weird.

– Why wasn’t there signs of forced entry at Pelosi home?

– Who was 3rd person who opened door for the police?

– Why was Pelosi holding hammer, and attack only happened after police arrived?

– Where is bodycam / security footage?

– Why isn’t the press asking these questions?

David DePape, the suspect in the incident, has been described in the media as being a “fringe activist drawn to conspiracy theories,” and is currently facing charges of attempted murder and burglary.

The Associated Press wasted no time attempting to link the case immediately to the GOP, saying, “Threats against lawmakers and election officials have been at all-time highs in this first nationwide election since the Jan. 6,2021, insurrection at the Capitol.”

California Gov. Gavin Newsom went on to claim that the reason for the attack on Pelosi is because Fox News host Jesse Watters has consistently “dehumanized” the Speaker of the House. Watters was having none of it.

He fired back, “If there is anyone to blame besides the ‘mentally ill homeless drug addict’ who actually swung the hammer, it is the governor who has left people vulnerable to him.”

Newsom accused Fox of “creating a culture and climate like this.”

“California Governor Gavin Newsom is running for president. So, when a mentally ill homeless drug addict, who’s committed crime after crime in his state and was never deported, attacks Paul Pelosi with a hammer, Gavin Newsom has to blame anybody but himself. And Gavin Newsom thinks Jesse Watters is to blame for Paul Pelosi getting hammered,” Watters commented in response.

“We have always said Gavin’s biggest flaw – he’s not very smart. The deranged drug addict who talks to fairies and lives on a school bus didn’t watch Primetime and head on over to Pelosi’s house with a hammer. And has Gavin read the affidavit? Because DePape wasn’t going over there to get Paul, he was going there for Nancy,” he added.

“If anything, Gavin Newsom has done more to aid and abet this attack on Paul Pelosi than anybody,” the Fox host continued. “David DePape is a homeless criminal and an illegal alien. DePape overstayed his visa for years. Committed crimes. California is a sanctuary state, so he was never deported.”

A piece published by the Intelligencer has claimed that the motive for the assault was that DePape wanted to torture Nancy Pelosi. Apparently, DePape broke into the home, woke Paul Pelosi, who then called the police from a backroom.

“The 911 dispatcher sent police there to perform a well-being check on Pelosi at approximately 2:27 a.m. When officers arrived, they found the assailant struggling with Pelosi over a hammer. The officers told them to drop the hammer and then the assailant struck Pelosi in the head, knocking him unconscious. The officers then tackled the assailant and took him into custody. After rendering aid to Pelosi, he was interviewed inside an ambulance and transported to an area hospital for further treatment,” the Intelligencer reported.

We need to know the details behind this assault because the radical left is weaponizing the incident against the GOP and conservatives in general. If the truth is released, that will impact the narrative being spun in the mainstream media. It’s time for Pelosi to release the security footage.