‘THE PEOPLE HAVE SPOKEN!’ Trump Calls For The January 6 Committee To Be DISSOLVED After Liz Cheney’s Loss

– Former President Donald Trump is now calling for the January 6 Committee to be disbanded after Republican Rep. Liz Cheney of Wyoming was properly put back in her place after losing her primary race on Tuesday, referring to her loss as a “referendum on the never ending Witch Hunt.”

According to a report from Breitbart News, Trump published a post on Truth Social that said, “I assume that with the very big Liz Cheney loss, far bigger than had ever been anticipated, the January 6th Committee of political Hacks and Thugs will quickly begin the beautiful process of DISSOLUTION?”

“This was a referendum on the never ending Witch Hunt. The people have spoken!” he stated with enthusiasm.

When Cheney was delivering her concession speech on Tuesday evening, she strangely went on to compare herself to President Abraham Lincoln, making the assertion that she only lost reelection due to the fact she would not “go along with President Trump’s lie about the 2020 election.”

I’m sure it had absolutely nothing to do with the fact she’s an establishment hack who sought to join up with Democrats in not only targeting Trump and his followers, but also in attempting to shut down the real progress America made during the Trump administration.

“The great original champion of our party, Abraham Lincoln, was defeated in elections for the Senate and the House before he won the most important election of all,” Cheney stated. “Lincoln ultimately prevailed. He saved our union and he defined our obligation as Americans for all of history.”

Cheney then spoke with NBC on their “Today” program, where she said she’s considering a run for the White House in 2024.

Please, for the love of all that is good and right in this world, do not do that, Liz. You’ve done enough damage already. Not to mention the vast majority of Republicans and conservatives have little in the way of love for you. Just butt out and go back to the private sector and do something productive for society.

According to a report from the Daily Mail, the actions of Cheney against Trump actually led to her being censured by the Wyoming GOP. She also went on to lose her number three spot in the House Republican Conference, being replaced by Rep. Elise Stefanik as the chairwoman.

Given all of that, why in the world would she even bother to consider a run for president? She has about as much hope of landing in the White House as Sen. Elizabeth Warren does for the Democrats. Which is basically none.

“Trump has dubbed the House select committee on January 6 the ‘unselect committee’ as a way to voice his disapproval of their proceedings, which aim to peg the riot last year on the former president,” the Daily Mail reported.

“Cheney is one of 10 Republican representatives who voted for Trump’s impeachment in relation to the riot. Of those 10 lawmakers, only two have won their primaries while the rest have either been voted out or are retiring,” the report added. 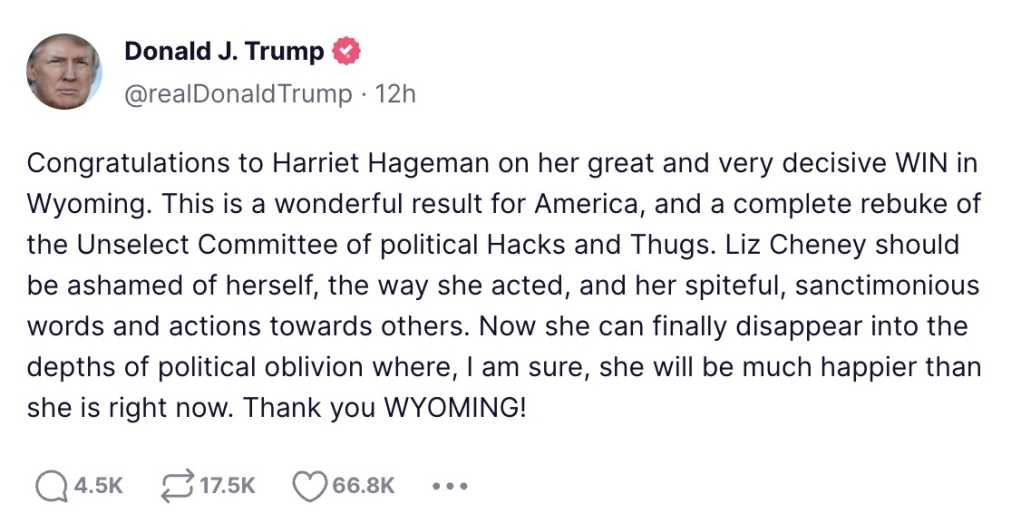 Indeed, the people have spoken.