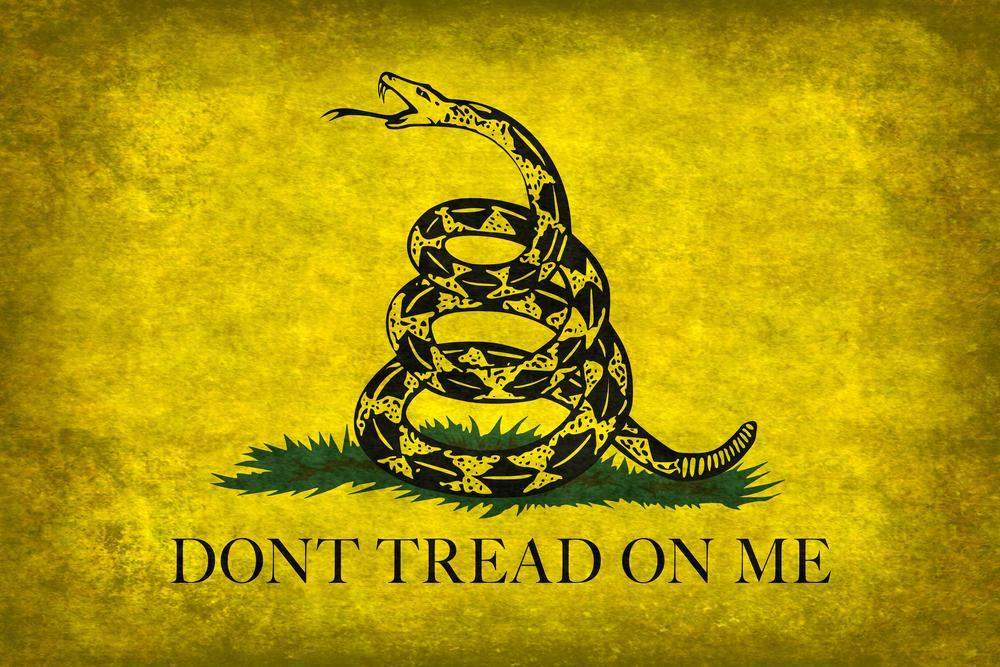 (TeaParty.org Exclusive) – The political left loathes patriotism and anyone who actually loves the United States of America. Leftists claim to stand for freedom and democracy while attempting to fundamentally change and destroy everything that makes America great.

Despite pretending to care about the constitution, Democrats have long despised the First Amendment and have openly censored and silenced political opponents.

Nothing has changed. On Wednesday, NPR reported that Florida Gov. Ron DeSantis’ tweet regarding a new Florida license plate featuring the Gadsden flag, known for its famous “Don’t Tread On Me” slogan, has “reopened the debate” over the flag’s supposedly controversial message.

The report, by writer Scott Neuman, claimed that despite the flag existing since the founding of America, it’s now somehow associated with “far-right extremist ideology.”

Of course, “far-right extremist ideology” is nothing more than wanting the US to remain the land of the free and being allowed to be proud of being an American.

“The imagery of the Revolutionary War-era Gadsden flag dates to Benjamin Franklin but has, for many, come to symbolize a far-right extremist ideology and the ‘Stop the Steal’ movement that sought to overturn the 2020 presidential election results,” Neuman whined.

On July 30, DeSantis tweeted an image of the new Florida state license plate and encouraged residents to pre-order them. Proceeds for the new plates will go to the Florida Veterans Foundation. How “extremist.”

In his article, Neuman quoted criticism of the flag from the typical leftists you’d expect to be bent out of shape over a flag that promotes freedom and the tenacity required to fight for it when necessary.

One such critic was Rachel Carroll Rivas, deputy director of research and analysis for the Intelligence Project at the leftist Southern Poverty Law Center.

“She says it’s become clear that the flag has been used for some ‘really awful’ causes, most notably the Jan. 6 insurrection at the U.S. Capitol, where violent protesters attacked police as part of an effort to overturn the results of the 2020 presidential election,” Neuman asserted.

You can always count on the left for over-the-top rhetoric. NPR’s own tweet sharing the article was no exception.

Neuman was forced to admit in his article that the flag and its famous motto are both considered protected speech under the First Amendment, no matter who uses them. He continued to use extreme rhetoric even in explaining that.

He wrote, “Extreme or not, First Amendment scholars such as Eugene Volokh of the UCLA School of Law say the Gadsden flag and the ‘Don’t Tread on Me’ motto are legitimate — and protected — speech, whether they are on a flag waving inside the besieged U.S. Capitol or on a vehicle license plate heading down a Florida highway.”

Democrats despise the Gadsden flag because it’s contrary to their ultimate goal for the US which is complete domination and control of the American people. Democrats hate the idea of Americans actually taking a stand and fighting for their freedoms.

Every time they see the Gadsden flag it’s a reminder that the American people are not on their side and do not buy their radical, progressive agenda.

“I don’t think it’s appropriate,” Kansas Senate minority leader Dinah Sykes said after the Republican-led state legislature overruled the Democrat Gov. and approved the flag on license plates there. “When I see that, whether it’s a flag or a license plate … it’s not a good feeling for me.”

Of course it isn’t. It’s just another reminder that the left is not going to transform the US into a liberal hellscape as easily as they would like.